The dust has now (literally) settled on the site of the 175+ year-old Shortreed Farm at 797 Victoria Road North.  The outcome could have been very different in my opinion.  Somewhere in the rubble is accountability.  The staff report from the in camera Council meeting of September 27 (when the decision to demolish was made) is now public.  The report is linked below.  It's a good read. 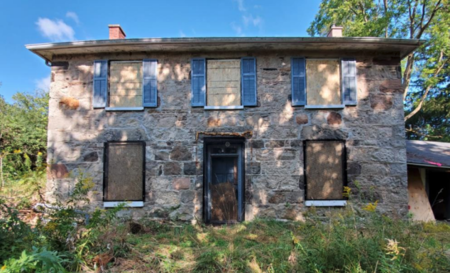 The report provides a history of the property and an assessment from the Fire Chief that there was "immediate threat to life" due to evidence of illegal entry, previous fires on the property, and combustibles in and around the house.  The Chief attempted to work with the GRCA to better secure the property, but despite wire mesh on the entry points and regular patrols, vandals continued to enter the house.  Since the risk of fire remained a concern, the Chief issued an order to demolish the structure on August 4th.

The report also contains a summary of the historic value of the property.  The report states:

The stone farmhouse building at 797 Victoria Road North satisfies all three of the criteria used to determine cultural heritage value as per Ontario Regulation 9/06 made under the Ontario Heritage Act.

Based on the assessment of our professional heritage planner,  our city Planning Staff recommending pursuing designation of the property under the Act.

I have no issue with the factual information in the report.  What's missing is the accountability piece and unanswered questions.  It's about public process and public trust.

From these themes, the list of related questions grows.  Because the legal advice related to the decision occured in Closed Session, most of the questions below, that would normally become part of the public debate, still linger in the community.  Disclaimer:  the analysis below is my perspective and opinion about how the issue played out.  I am not a lawyer.  I am an elected public servant exercising my oath of office to uphold my legislative duties under the Municipal Act, Ontario Heritage Act and Fire Prevention and Protection Act, and bylaws of the City of Guelph.

Before the Demolition Order

The house became vacant in 2017.  At that point, the Grand River Conservation Authority (GRCA) intended to pursue a severance and sell the property as surplus to its needs. It has successfully done this on many of its other properties.

In May of 2021 this property came to the attention of the Fire Chief when the first barn fire occured.  At that time, the Chief attempted to work with the GRCA to better secure the site to prevent unlawful activity.  Another outbuilding fire occured in July of 2021.   The Fire Chief assessed future risk and determined "immediate threat to life" and issued the demolition order on August 2, 2021, to be implemented by October 4, 2021.

NOTE:   I have great respect for our Fire Chief, and his intent to protect his firefighters and the public.  I would never make a decision as a member of Council to put our first responders, or the public, in harm's way.

That being said, the Fire Chief has numerous options within his authority if "Immediate Threat to Life" is assessed.   The Fire Prevention and Protection Act (FPPA)  Section 15(1)  gives the Chief the ability to order a fire watch, remove combustibles, install fire suppression systems,  and "any other thing" he feels necessary to "remove or reduce threat to life."   The Chief's authority is surprisingly wide open.

Fast forward to August 4th - the date the Fire Chief issued an order to demolish the building under Section 21(1)(a) of the FPPA.  Section 21(1) also contains a list of measures the Fire Chief has the authority to order to reduce, mitigate or eliminate risk to safety.   Once the order was issued, Council was notified by email as an FYI.  Given my passion for heritage, whenever I receive information like this I check the Municipal Register of Cultural Heritage Properties (the "Register") to see if it was listed.  I checked.  It was not there.  So I didn't think twice about it.  It turns out the property was listed in the Register as 774 Victoria Road North - the wrong address.  It has since been updated after I moved a motion on October 6 to correct the Register.

Fast forward to September 27th.  Almost two months have passed. The staff report and recommendations to demolish the house are placed on a Closed Session (aka in camera) agenda of Council.  No public report is included in the agenda.  The public is told that we are going into Closed session on the grounds that we will be discussing "security of property" and "legal advice" (Section 239 (a) and (f)).  This is not our normal process.  In similar cases, we have placed a public report on the agenda (minus legal advice) and presented the report in public, then moved in camera, and then returned to open session for further questions and debate.  This way, the public can provide input in writing or as a delegation and we can weigh this input, along with legal advice, as part of our deliberations.  Our role as elected officials is to weigh multiple, often conflicting, inputs and perspectives and make decisions in the best interest of the public.  We are quite capable of balancing legal advice and public input before voting.

Now that the report is public, it is clear to the community that most of the report (more than 95%) contains information that should not have been privileged (the cultural heritage information, the timeline of the Fire Chief response, the GRCA history, and more).  Legal advice is protected and I agree with that section being removed.  Everything else is public.  The reason given for withholding that information -- to protect further trespass on the property -- is not protected by the Municipal Act.  Section 269 of the Act excludes Conservation Authorities under the definition of "local boards".

Decision Making and Due Diligence

Did Council have all the necessary information to make a fully-informed decision?  In retrospect, I do not believe so.  It's one of those cases where "you don't know what you don't know."  For example, I did not know that the cost of enforcing a Fire Chief Order is 100% recoverable from the property owner.  Nor did I know the range of alternative measures in the FPPA  to address immediate threat to life.  Nor did I know that conservation authorities were excluded from the definition of "local boards" in the Municipal Act .  Nor did I know the potential consequences to the city (and its Board of Directors) if we willfully violated the Heritage Act.  Should we ought to have known?  Or should our professional staff have provided us with all the information we needed to make a fully-informed decision?  A bit of both I would say.

Rules of procedure and process are essential to accountability and transparency.   Our procedural bylaws are a commitment that we will operate in a prescribed manner when enacting the business of the city.  Regardless of the issue, whether it is the preservation of a historic farmhouse or passing our annual budget, we are obligated to follow the rules of order.   Two special meetings (Sept 30 and October 6) were called to deal with matters of procedure based on information that was learned after the meeting was adjourned.  In the case of October 6, we met to validate whether we knew what we were doing on September 30.  As the mover of the Motion of Reconsideration, I knew what I was doing.  I will leave that discussion for a future editorial.

So here we are.  A demolished heritage building and eroded public trust.  The interior features of the house are for sale.  The salvaged stone is being delivered to the city's stone graveyard.  This requirement is insult to injury.  The beautiful granite should be left on the property from which the stones were originally gathered in the 1840s.  Left in situ, they could form a monument to what was once there or constructed into a stone fence or any other number of on-site uses.  Now they will sit in a pile, in a field, until nature reclaims them, never to be seen again.  Just like all the other buildings and farmhouses (the Mitchell farm, the Eustace Farm, the Lester Farm, the Tolton-Adams Farm, the Wilson Farm just to name a few) that sit nearby.

Could Have, Should Have

In reviewing all of the steps that led to the rubble, there are ten things that could have changed the fate of this historic structure.

There is much to be learned for the unfolding of this issue. Our CAO has committed to reviewing this file and how it unfolded.  It will take some time to let this process happen and necessary actions to be taken.  I believe our CAO will do a thorough job of auditing this file.  We must rebuild public trust.

Allow me the opportunity to add that I am not beyond accountability. Some members of Council, including myself, did indeed raise questions and challenge the process along the way.  Perhaps I didn't protest strongly enough. Perhaps I should have been more familiar with the FPPA in advance.  Perhaps I should have called a Point of Procedure when the motion to reconsider passed and was ruled as "defeated."  Trust me when I say I have asked myself these questions.  Meetings move very quickly and I did not have relevant sections of the various legislation in front of me. Something didn't seem right to me, but I could not put my finger on the reasons in the moment.  After the meeting, I dug a little deeper.  Councillors should be in a constant cycle of listening, learning and adapting.  Those who do not, will repeat the same mistakes again...